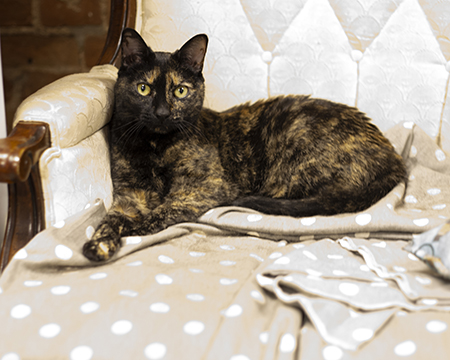 Despite her name, Freddie’s a girl! In fact, almost all torties and calicos are. Only about one in three thousand of them is male – definitely a girl’s club!

“Does she live at the shop?”

Yes, Freddie is our full-time shop kitty. Between all the mingling she gets to do during open hours and our after-hours projects, she loves her alone time. Finally, peace and quiet!

(Don’t worry, someone comes to take care of her every day, no matter what.)

Nope! Freddie was originally a stray, so she’s had her fill of the great outdoors. She’s a clever girl and knows she’s got it made right where she is!

Sure, but as with all cats – be careful! Make sure to be gentle and avoid obvious “hell no” zones like her tummy, ears, tail, etc. There’s a handy guide next to her favorite chair to tell you what she likes and doesn’t like! Just remember that cats are sensitive creatures, and even well-seasoned shop kitties can get overwhelmed. Especially with little ones, caution is key. Respect is the number one rule when it comes to petting any critters!

“When did Freddie join the Snarkington’s team?”

Freddie has been with Snarkington’s since August ’21.  Her original family was none only then one of the owners of our awesome neighbors to the west, Maker General!

“Where did the name Freddie come from?”

Freddie let her personality known to her former owners by doing a little “extermination” work. She was a little messy with it and the aftermath had some horror movie vibes. That is to say, she destroyed a rodent and made a huge bloody mess.  (As far as we know, she doesn’t have any control over people’s dreams, though.)